It is a truth universally acknowledged that … tourists love goats (and camels)! This is no less true of the editors of L’Éphémère Review, who are reprinting a short piece called “Friends With Goats” in their issue on the theme “lithe.”

I don’t know how it was for the other Trainees, but as we went from one question to the next, sid Muna’s answers seemed perfectly calibrated to put me at ease. I knew her people, had grown up with sprawling extended farm families. Back home, they raised cows and farmed corn. In my new community, they raised goats and grew olives, but I felt reassured that I would find commonalities there, touchpoints for mutual understanding.

Part of the litheness I’ve learned as a teacher is about bending to find a connection with each student, striking that note that makes us simpatico. Sometimes it’s quick but sometimes, as was the case with my neighbor’s son Osama, it takes a long time and a little luck … and tiny, knock-kneed newborn goats.

one of the most poignant, sentimental and well-crafted nonfiction pieces I’ve read this year

and will feature it in the magazine’s Best of 2018 blog. Read it here in L’Éphémère Review.

This story was previously published online and in print by The Amsterdam Review. 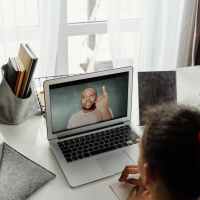