I chose to celebrate Egypt’s new-found democracy with a Bike & Hike with the group that was formerly known as Tareef Cycling Club.

Jad warmed me that cycling and hiking with the organization Tareef had become was not the same experience as outings with Tareef. Even so, I’d really missed those weekly trips, and I wanted to get out of the city and get some exercise while I was here. Plus, I knew when I’d RSVP’ed to Aktham that he, at least, would be going, and I was looking forward to seeing him. He brought along a fellow Iraqi Kurdish refugee who’s been living in Orange County, California, since she was relocated several years ago, and she was also fun to spend time with. We talked a lot about the cultural differences between Jordan and the US: what she and I had learned and Aktham will discover when his resettlement to Anaheim finally comes through. 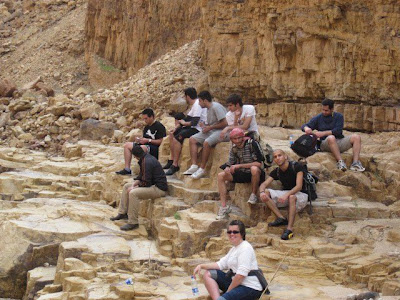 Sure enough, it was not the same mixed demographic I remember. It was almost entirely 16-18 year old boys. In fact, it reminded me of backpacking with the Boy Scouts in high school, where everything’s a race, and the boys were literally climbing the walls of the canyon. Still, it was the same beautiful Wadi Himara I remember from previous trips! 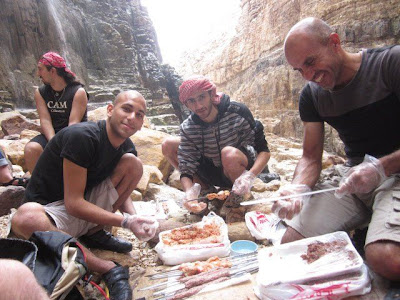 Politics was Inevitable
One of the things I always loved about Tareef was that even while we were raising money for the Gazans in the Hannukah War, no one spoiled our fun with discussions of politics. But Egypt’s revolution is something entirely different. It has infused Arabs with a sense of hope they can’t remember ever having, perhaps best explained by the Black Iris and Christine Makhamra of 7iber.com. When they find out that I fled Egypt to Jordan, everyone wants to know what it was like to be there at this exciting time. I keep coming back to the same point: for the first time since I’ve been in Egypt, I’m finally seeing Egyptians proud of their country, hopeful for the future, and believing in their ability to influence national politics. It’s inspiring, and I can’t wait to go back on Wednesday!