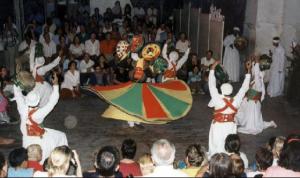 I know it’s not the real traditional whirling of Mevlana Rumi’s dervishes, but it was still quite a spectacular show, seeing the dervishes whirl in Wikalat al-Ghuri on the edge of Khan al-Khalili market in Cairo. They really don’t spot on some physical space like a ballerina. As I taught my students at “nerd camp,” they spot on their dhikra, on the Name of God that guides them and holds them. And I see what the woman from the UU Church of Bloomington meant about the footwork being special. Dervishes don’t whirl on their toes or the balls of their feet like ballet dancers. Instead, one leg pushes while the other foot turns on its heel. And not only was the dancing incredible, but the location was amazing, the courtyard of an old caravanserai.

Then we went and met Galaal for a cup of tea. There’s something so frenetic about Cairo, and yet in the heart of Khan al-Khalili, the biggest market in one of the biggest cities in the world, somehow I didn’t mind the chaos as I usually do. In general, cities overwhelm me, and you’d think that sitting outside of the historic al-Fishawwi Cafe in the middle of the market would completely undo me. But even as the vendors marched past, one after another pushing rugs and alabaster and jewelry and henna designs in my face, I found it oddly invigorating, and so typical of the Arab World you read about in Romantic literature….

And it was so much fun to hang with Galaal and Megan! I sure miss those guys! It would only have been better if Zoe could have met up with us, too.