Why Some Young UUs Leave

Much gratitude to Rev. Patrick McLaughlin and The Unitarian Universalist Church of Manchester, NH, for this opportunity to share some stories that go beyond the widely shared Coffee Hour Caution regarding small talk with young people in our congregations.

Someone expressed incredulity that such a warning was needed, and I get it. If you’ve never felt marginalized, unwelcome or pushed out of a congregation, you might not know how that pain can linger.

A few weeks later, the Unitarian Universalist Association’s Commission on Institutional Change released their September statement. I would encourage you to read the whole statement—it’s insightful, and challenging, but this passage in particular caught my attention:

Leadership is increasingly held by retired boomers with little interest in younger generations in leading in UU religious life as it is at the congregational level…. At times, this generational cohort acts in ways that force potential young leadership to leave. Younger leaders expect multicultural competence and are often skilled at leading with it. Currently, we do have much to do to allow a diversity of leadership.

This is a conversation I’ve been actively engaged in for half a dozen years, and I’m excited to see it gain prominence to the national level. I invite you to join me in this conversation.

For those who aren’t familiar, the Commission on Institutional Change came into being after what was, for me, a gut-wrenching national controversy over whether the Unitarian Universalist Association—the UUA—was consistently passing over qualified People of Color, women and non-ministers in its hiring process. One result of this controversy, and a lot of hard work by your own Rev. Patrick and the rest of the UUA Board, was the forming of the Commission on Institutional Change. They were given the charge to “analyze structural racism and white supremacy within the UUA through General Assembly 2020.”

[Read more here about the history of the problem they are confronting.]

At the time the Commission was formed, I was leaving my church job, which had included a lot of racial justice organizing work within my congregation and community, focused primarily on helping white people understand their place in historical and contemporary systems of white supremacy in America. I considered that work deeply entwined with a struggle I was also having with leadership who loudly proclaimed that they were “building a church for Millennials,” but frequently dismissed my opinions, although I am, as a 1981 baby, a leading-edge Millennial.

In one notable exchange, speaking as both a Millennial and a staff member working closely with the Stewardship Committee, I tried to explain that my young adult peers, early in our careers with tens of thousands of dollars in student loans, struggling to find long-term employment at a sustainable salary, had expressed to me that the language the congregation used to talk about stewardship was alienating. Leadership told me that this sentiment was not representative of Millennial UUs, because some of our congregation’s young adults were giving thousands of dollars a year.

As the stewardship database manager, I immediately ran down in my mind who those several-thousands-a-year young adult givers were. Though our most generous young adult donors were important leaders in the congregation, they were not the congregants whose voices I was trying to lift up. Those big donors were not the teachers and social workers and artists who had told me that, despite volunteering sometimes dozens of hours a week, they still felt that they couldn’t belong to the community because of their inability to contribute cash money. And while they felt less than fully part of the congregation, their diversity of backgrounds and perspectives were vital to our congregational life: their leadership of our racial justice initiatives, their leadership of our small group ministries, volunteering for our food justice initiatives, singing in the choir, teaching in our religious education programs … but again and again my peers told me that they didn’t feel like they were real members of the congregation because they didn’t make enough money.

Their stories tugged at me, in part, because I myself have taught Religious Education for youth and adults, led community events and congregational groups, and participated in small group ministry in three Unitarian Universalist congregations, but I’ve never signed a membership book, because I’ve never found myself in a position to give financially to a congregation the way I’d been told that a full member should.

But this isn’t only a problem of stewardship.

I have a lot of friends who are so-called “free-range UUs”—born and raised in UU congregations as youth, but who, as adults, have never felt fully welcomed and accepted in a congregation. I can’t tell you how many times I’ve heard variations on this story:

I was in need of a progressive religious community, so I went to the only UU congregation within 100 miles, hoping to find my people. I started asking about the congregation, and someone [ a greeter, an usher, the membership chair, sometimes even the minister ] said,

“Oh, we don’t have anything for young people like you in our congregation. But that’s okay. You’ll be back when you have children.”

Now, it’s true that our progressive, multifaith approach to Religious Education is one of the largest drivers of new membership in UU congregations. And yet, this knee-jerk response to the arrival of a younger person—to immediately start talking about RE—is problematic for many reasons. What about young adults, for example, who don’t want to be parents, or are unable? And even if that person goes on to have children, why would they want to return to a congregation that explicitly indicated that they were unwanted, but for their children?

Again, this is a story I’ve heard many times, and usually from heterosexual-presenting, white, cis-gendered (which is to say, not trans) lifelong UUs like me. But what happens to childless young UUs who also have other marginalized identities? This, incidentally, is a topic also touched upon in the September statement of the Commission on Institutional Change.

I have permission to share with you a friend’s story from earlier this year. Raised UU, this recent college graduate lives in a large Pennsylvania city and, while still searching for their first job as a special educator, felt a powerful need for their UU family. These are their words:

I just went back to my home congregation this past weekend for the first time after the loss of my father. … I had a really hard time because everywhere I looked, I saw my dad. A friend asked me to share a joy so I stood up and I spoke for sharing of Joys and concerns, because public speaking is a thing I do well. So, at coffee hour I was approached by an elder who has known me since I was a baby, who said to me,

“I forgot just how well you speak, you really are eloquent, I’m going to talk to so-and-so about putting you on the list for lay leaders.”

I didn’t really know how to respond to that because I’m just barely getting back to church after a personal loss and [this elder is] asking me for my labor. I’m intrigued, but at the same time really put off.

My friend, who has only recently begun coming out to friends and family as trans and nonbinary, added,

Also, I’m not out in church. I would have to pretend to be someone I’m not, [in order] to fulfill this role that they have placed upon me, and I’m not super into that.

Why isn’t my friend out at their Unitarian Universalist congregation, you might ask? Aren’t we super welcoming to LBTQ people in our faith? Certainly it’s a key element in how many of us identify ourselves as Unitarian Universalists, but many of my queer and especially trans and nonbinary friends struggle to find comfort, much less acceptance in UU circles.

TRUUsT, an acronym for Transgender Religious professional Unitarian Universalists Together, is a collective founded 14 years ago to support and advocate for trans UU religious educators and ministers. One month ago today, they issued a statement introduced as follows:

In the wake of recent events and the Trump administration’s continued assault on trans lives, TRUUsT calls on Unitarian Universalists everywhere to take immediate action to […] directly support trans UUs. Unitarian Universalism’s commitment to trans lives is all too often aspirational rather than true today. According to a recent survey, only 28% of trans UUs feel that their congregation is fully inclusive of them as trans people.

Let that sink in.

only 28% of trans UUs feel that their congregation is fully inclusive of them as trans people.

Which brings me back again to the Commission on Institutional Change’s report, specifically the part about how “Younger leaders expect multicultural competence and are often skilled at leading with it,” but Boomer’s in our congregations may not be making space for them to use those multicultural skills. I would argue that, too often, we are not just failing to make space. We’re pushing younger leaders out of our congregations.

My father hates it when I call out Boomers as the generation that perfected the systems we Millennials most often find ourselves struggling against. Hashtag: not all Boomers. And he’s right.

On the other hand, the Commission is not wrong to point out that younger generations are increasingly inclusive, increasingly mindful about avoiding language that alienates queer, trans, disabled, single and people of color in our movement, and in society at large. One of the newest crop of Rhodes Scholars is Jaz Brisack at the University of Mississippi, and an active member of The UU Congregation of Oxford, Mississippi. She pulled no punches in an interview with her university’s paper, saying,

“… in a state still very much dominated by patriarchal structures, given that our state amplifies the voices of white supremacist women like [Senator] Cindy Hyde-Smith who reinforce and uphold misogynist policies, I’m glad to be able to provide a very different example of how an empowered Southern woman acts.”

These are the kinds of young people we draw into our congregations. Jaz is a labor organizer, an abortion clinic defender. She’s a justice-seeker and a change-maker, fighting to help both secular and UU communities widen their embrace. We have to consistently prove that we see someone like Jaz as a whole person, not just another young adult. If we don’t, a young person like her may well walk away, might leave a congregation that doesn’t embrace her to find her people in organizing work or academic circles, instead of continuing to bring her gifts to Unitarian Universalism.

I knew I wanted you to hear these stories from my generation, and I knew I needed you to know about the reports from the Commission for Institutional Change and TRUUsT, but it took me a long time to figure out what pulls them all together.

I think the words really do matter. If you’re trying to be friendly or helpful or uplift someone, but your well-meaning words and actions make the other person feel unwelcome, unheard or taken advantage of, does your intention really matter more than how they feel?

We think, because we’re in church, because we’ve come here to become better people, that our mistakes will be forgiven. Often, that’s true. But words have power. Sticks and stones can break my bones, but words can also hurt me.

I used to tell the congregation that I worked for that I had three mantras of church work, but only the third and most difficult one really mattered. It’s this:

“Everyone you meet is fighting a battle you know nothing about, so be gentle.” 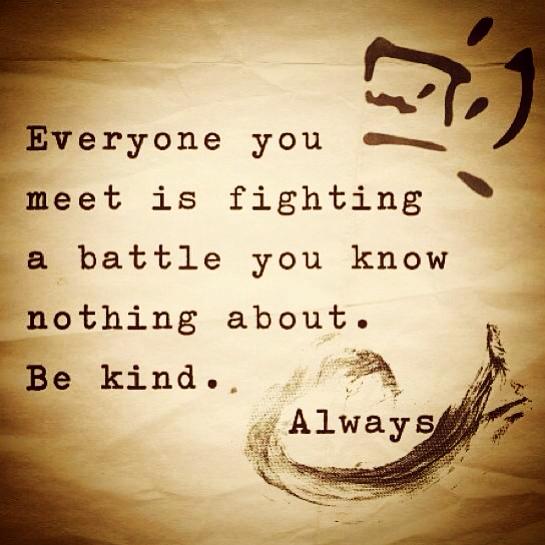 Our words don’t have to make their battle any harder.

On a good day, we may even help to ease the battle for a short while.

Amen. Blessed be. May it be so.