Today, the All Souls Writers Group and others are remembering Margie King Barab in a Quaker meeting-style memorial gathering. I am unable to go, but wanted to share my own remembrance of her life nevertheless.

In 2012, I was unemployed for six months. It was the impetus I needed to go back to something I had loved since kindergarten: writing fiction. It had been five years since I’d had my heart broken by a series of what seemed like impossible rejections, five years when I had hardly written a thing. Now I had time on my hands and, it being 2012, doubts about becoming employed again any time soon. Needing to make my time meaningful, I made three guidelines for myself.

I had always known I was competitive with myself, but I had never thought to apply that to writing like this. It was wildly successful. By the time I found a job, I had finished one werewolf romance novel, written half of another in the same world, and started two more.

In my new job as Membership Coordinator of All Souls Unitarian Church, it was in part my job to support the leadership of congregational affinity groups, and in part to help newcomers to the congregation find their way into the groups that would welcome them best. In the initial months of my new job, I committed to attending every group at least once. I started with the All Souls Writers Group, with a thought to perhaps becoming a regular attendee.

It quickly became a commitment. I was the only one under fifty, the only one who even read romance novels, let alone wrote them, but I was embraced with enthusiasm nevertheless. The core group of women were extraordinary: Valorie, Rosalyn Will, Carmen who kept us in stitches, and our fearless leaders, Marilyn Mehr and Margie King Barab.

Three were poets, three had been published, four were memoirists, all were thoughtful and frequently funny. The lives they described in their work were extraordinary: wholesome Midwestern girls become Broadway ingenues, finding and losing love and marriages, struggling with the religion of their parents and their own callings, encounters with fame and the famous, brushing up against drug culture, the HIV/AIDS crisis, Marlena Dietrich and a hot young personal trainer named Bruce Willis…. It was a pleasure and a revelation each week.

With some trepidation, I brought them the opening to my werewolf romance. “We don’t know anything about werewolves or romance novels,” cautioned Margie, but they were all game to try.

“That’s a good thing,” I reassured them. “If you can understand it, and if it draws you in, then surely it will interest someone who reads paranormal romances.”

Draw them in it did! “We don’t understand it, but we want more!”

“You know,” confessed Margie conspiratorially one day, “in this group, we like sex!”

At the same time, as I listened to many of them read from their memoirs, was drawn in by their fascinating lives, I thought more and more often about the memoir of the Peace Corps I had been trying to write for years.

From the very first exercise, Ros set me on a brand new, exciting path. I began to bring snippets of memoir to the All Souls Writers Group. While Margie would continue to ask after my sexy werewolves, with memoir the writers were on surer, more familiar footing. They pushed me, challenged me, stretched my writing in new directions … the core group and our fearless leaders Marilyn and 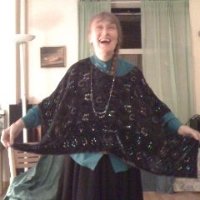 Margie most of all. If sometimes the response was mostly “this is great,” I didn’t mind, because their encouragement and enthusiasm was its own important contribution, confirming that I had a story both compelling and timely.

The rule of Writers Group was that you could sign up to read only once a month, since only six people could read at each meeting. It was a rule I could respect. Yet, as the group became more and more enamored of my work, and our numbers ebbed as they were wont to do sometimes, Margie would sometimes perk up towards the end of a meeting that was one or two readers short. “Oo! Maybe we’ll have time to hear from Maryah! Did you bring anything?” Following a precedent set by our witty friend Carmen, I began to always have something on hand to read.

My friendship with Margie, however, was not confined to Writers Group alone. The church’s Communications Director and I used to joke that in our next career, we would teach computer skills at senior centers, since we so frequently fielded calls from elderly congregants struggling with their email or word processors. Margie was one of my particular students in that regard, calling every few weeks with one thing or another.

Then, almost two years into the job, Margie’s dearly beloved second husband, the opera composer Seymour Barab, died after struggling for some time with illness. Though I never had the pleasure of meeting Seymour, I was surprisingly moved by his death (it came around the same time as the death of the great Margot Adler, which had struck me surprisingly hard, tenderizing that grieving muscle), or perhaps by its effect on our dear Margie. She began to call more frequently, talking through this or that matter regarding Seymour’s memorial, or something about the Writers Group. It was clear that she was lonely, a bit adrift, and I was honored to be thought of.

My last year at All Souls, regrettably, was devastatingly ugly, and my intense relief at finding a new job in a new neighborhood powerfully overshadowed my disappointment in leaving the All Souls Writers Group. I knew they had been transformative for me as a writer, that they would appear in the dedication or acknowledgements of my memoir when finished. I knew I had looked forward to the second and fourth Monday nights with incomparable pleasure, that to miss a meeting felt like letting them and myself down. All of this, however, was overshadowed by the need to make a clean break from my job, which included abruptly and completely leaving the Writers Group.

The death of Margie King Barab this month upended my whole internal narrative of what leaving the All Souls Writers Group had meant for me. “I’m beginning to think it’s the single thing I miss most about All Souls,” I told my partner.

And so, a final small, spontaneous poem to our Margie:

though the internet knows you only as wife to your famous husbands,

to me you will always be yourself first…

fearless co-leader of the All Souls Writers Group…

cheerleader of all our deeply felt work, held in the circle of your Writers Group with tender critique and enthusiasm…

biggest fan of my tales of Arab women … and men…

fearless Nebraska ingenue made good in the big city…

May you rest in peace, my dear!