The Hubris of Houston

I am heartbroken over the devastation in Houston this week. I have been and will be writing more elsewhere about that and the long recovery. (Colorlines has one of the best rundowns of how to donate to the most vulnerable.) However, right now I want to take a moment to sit with the lessons and warnings that Hurricane Harvey has to offer regarding climate, class, government, and civil society.

I don’t pretend to be the most eloquent on these things, so I will offer a compilation instead of some of the things I’m reading this week.

Why are the crucial questions about Hurricane Harvey not being asked? If you read nothing else on this list, please read this. We caused climate change, we inflict it on those least able to defend themselves or recover from it, and we know we’re making it worse. And I think I may also adopt “climate breakdown” as my term d’arte.

On Race and Class

Race and Class Are the Biggest Issues Around Hurricane Harvey and We Need to Start Talking About Them: Some people may say that it’s too early for this conversation, that people are stranded and homeless and hungry right now and we have bigger problems, but isn’t that exactly how we got here? Ignoring these issues during and after Hurricane Katrina didn’t help New Orleans then or Houston now. We need to get on top of this.

On Climate And Environment

Why Storms Like Harvey Could Become the New Normal: Make no mistake: This is the climate crisis in action, and without taking substantive steps to shift away from the dirty fossil fuels driving it, we’re likely to see storms like Harvey more often in our lifetimes.

Please note, I do not mean to imply with the next two articles what some have said – that Texans deserve this deluge for the oligarchical Republican ideologues they vote into office. For one thing, Houston is a Democratic-leaning city, but more importantly, no one of any party deserves to lose everything like this, overnight, with almost no warning. And beyond Houston, we are doing this to our cities and coastlines, river valleys and communities everywhere.

Houston’s flooding shows what happens when you ignore science and let developers run rampant: Wetlands. The tragedy of Houston is a story about wetlands. Like New York needed dunes and barrier islands (and wetlands!) to protect us from Superstorm Sandy, Houston and New Orleans both needed more of their wetlands to protect them from Hurricanes Harvey and Katrina.

Houston Is Drowning—In Its Freedom From Regulations: Texas’s famously permissive zoning laws, which have made it such a fertile ground (pun intended) for the Tiny House Movement, as well as other ruggedly individualistic principles of regulation, have contributed greatly to the mass dismantling of Houston’s protective wetlands and other safeguards.

Harvey’s Toll on Energy Industry Shows a Texas Vulnerability: “We know so little about what these companies are doing, or prepared to do,” said Gretchen T. Goldman, the research director for the Union of Concerned Scientists. “History tells us something will spill.” There was also a frightening story on NPR this morning about the danger of pollution and explosions that this energy infrastructure poses to Houston communities.

Houston is Paying the Price for Public Officials’ Ignorance: Science matters. When politicians value votes and popularity over facts and truth, voters suffer.

Here are some additional environmental consequences of ignoring science:

On Government and Partisanship

We’re Nowhere Near Prepared for the Ecological Disaster That Harvey Is Becoming: Unfortunately, it’s not like we weren’t forewarned. It’s not like Houston hasn’t had three “100 year floods” in the last ten years. It’s not like climate scientists, engineers and city planners, activists and direct service providers haven’t been telling us for decades that this is coming.

Lawyers to Harvey victims: File insurance claims before law changes Sept. 1 or risk losing money: Accounts conflict as to whether this is true or not. Lawyers and consumer advocates, however, say the new law will severely limit homeowners’ ability to hold insurance companies accountable when they take months or years to pay for a claim, underpay or wrongfully deny legitimate claims. The State Senator who sponsored the bill says they’re wrong.

More than 20 Texas representatives and senators voted against Sandy aid. How will they vote on Harvey? Yeah, it’s a lot more complicated than this, a story of pork-barreling and partisanship and politics that had nothing to do with the suffering of hundreds of thousands in New York, New Jersey and Connecticut. But the fact of the matter is that Red State elected officials are more likely to vote against government spending, all while they take in more government dollars than Blue States. We have to talk about this.

Trump obliterated Obama’s flood protection standards days before Hurricane Harvey took off, and now Republicans all over social media are complaining about how terrible Obama’s response was to Hurricane Katrina. (Obama wasn’t president yet in 2005, remember.)

Texas’ secretary of state turned down Quebec’s aid offer, asked for “prayers” instead: Hoover Institution visiting fellow Markos Kounalakis told Politico, “Foreign governments are holding back, and that hasn’t been the case historically. They appear to be much more cautious, whether it’s for domestic political reasons or displeasure with President Trump. Do they want to be seen as helping Trump?”

Why Approving Emergency Funding For Harvey Might Not Be Easy For Congress: Trump doesn’t sound worried, but emergency response legislation has become increasingly partisan in recent years, and Congress is already facing a daunting stretch of must-pass bills when it returns next week.

On How and Where We Send Relief

​4 Things You(r Nonprofit) Should Know About Facebook’s Donate Button: Your money may not go where you think it’s going … and a friend in fundraising at the National Council on Independent Living tells me that your donation may not get to the nonprofit that needs it for 6 weeks or more, and they may have no way of knowing it came from you or giving you tax credit.

When disaster relief brings anything but relief: Houston doesn’t need your winter coat that’s so last season. They need your money, or the things on their Amazon WishList, or listed on their Websites. Most of all, they  need money to buy exactly what’s needed.

And so, without further doom and gloom, Here Are (More) Ways You Can Help People During Hurricane Harvey. 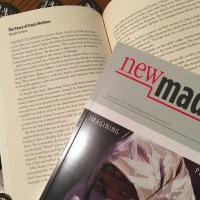