by Erin Morrell, reprinted with permission

When I asked my Syrian colleague today how she was doing in the aftermath of the Paris attacks she looked at me and said, I am sad because now everyone looks at my country like it is a horrible place. We are not bad people, we are good people, and there are those posing to be from Syria who are causing these problems and people think my country is a bad country. Her pastor suggested that people in her congregation who felt like they could answer peoples questions should do so but if it would invoke anger within themselves they should remain calm and remain quiet until their angered passed. This made my heart hurt. 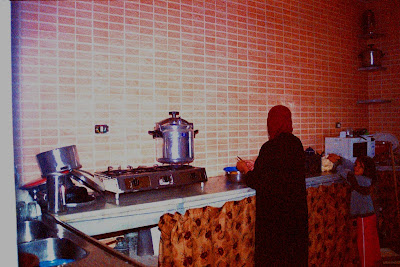 I served on the Syrian border in Jordan for two years as a Peace Corps volunteer. Many of the people who I lived with had their families split between the border when the Middle East was demarcated into different countries, so I have always felt a kin-ness with the Syrians I have met to my families in Jordan. While I was there these people cared for me. They invited me into their homes. They shared their stories and their secrets. They taught me that there is a way to be with people who are so different from you in so many ways – that love can transcend language and culture, history and politics.

I remember a time when I was so sick with a flu and I managed to drag myself over to my neighbors house. She had a way of making sure she was understood even if my vocabulary was limited to the absolute basics. She opened her home to me that day and sat with me while we drank a special tea and she explained in great detail how to make a chamomile steam to clear my sinuses. The soft cadence of her voice lulled me into a peaceful calm and I drifted in and out of concentrating on her instructions. In the time that we were next-door neighbors, she filled my heart with love and entrusted me with her sorrows.

I have never wanted Syrians to come to the United States as refugees, but when the conflict started and continued I began finding myself asking more often if Syrians were expected to be coming to the States. I was excited when our first single case was resettled here. I had the case managers take us to my home so I could put together a jar of magdoos and lebneh, zeit oo zataar – foods that make me think about summer afternoons in Jordan sharing meals with families who had gone through all the preparation to pickle eggplant and stuff it with a spicy pepper and walnuts, women carefully straining yogurt and shaping the solid cheese into balls to be packed in fresh olive oil pressed from the families’ olive trees. This particular person’s journey had led her to Southeast Asia for several years so this was the first time she had had these familiar foods in years. In a small way I could extend that love that I had felt embraced by in my village in Jordan to a newcomer to let her know that America wasn’t so bad.

The Peace Corps taught me that all people are resourceful and that intelligence is not about how perfect your grammar is. I left for Jordan right after I graduated from college and I can remember so often in the beginning wanting to shout at the top of my lungs, “I’m intelligent! I’m well educated! I have things to say!” but instead I was left with a fledgling vocabulary of my most important needs. When I left the Peace Corps I knew I wanted to surround myself with people from different places, with different perspectives, because it made me a stronger and a better person.

Recently during a farewell dinner for a colleague transitioning to a different position I was able to share a meal with coworkers from Nepal, Brazil, Iraq, Somalia and the US. We went for Thai, which was fantastic because several people at the table had never had Thai food before. We ambled in over a 30 minute period, after collecting children from daycare and driving friends home before settling in to dinner. As soon as the food hit the table plates went whirling around, passing dishes from one person to the next to make sure that absolutely everyone got to try each others dishes. As we shared a meal together and celebrated our friend, I found myself stepping back and looking over the scene. This love, this beautiful, mysterious and fleeting love that had been cultivated by a hunch that I could actually understand people so different from me has made my life rich with the cultures and languages of so many refugee and immigrant friends and I am so much better for it.

So it is with great sadness that I see so many turning their backs on the possibilities that these relationships could foster. It is true that refugees come with so much sadness, often struggling for years to meet the rigorous standards to get the coveted status of “refugee”. They leave their families, wives, husbands, parents. They leave their countries, careers, hopes for their futures. But even so they sacrifice that to be here, to be safe and they bring with them the gifts of having lost their everything and rebuilding themselves over and over again. I work with refugees because they constantly remind me of the resilience and strength of the human spirit and I am honored to work with and for people who bring so much to their communities.