Quiet Ride on the Nile

One of my favorite memories of Egypt, even now, is on a sailboat.

It was April 2009. I was staying in Cairo with a friend, and had booked sleeper train tickets to Luxor and back, with about fifteen hours between to see as much of the archaeological wonders of ancient Egypt as I could. A little haggling at the train station got me a driver for the day, and at a price I actually thought was surprisingly fair after my time in Cairo. 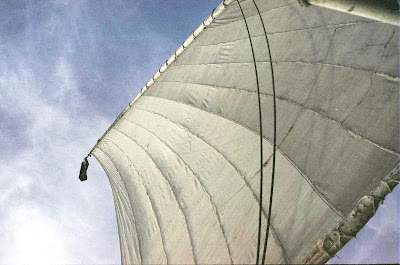 He dropped me at the massive ancient city of Karnak in the thin cool early morning air, but by the time we crossed the Nile and got to the Valley of the Kings, the heat was really beginning to build.

My driver was a middle-aged high school math teacher. I have had my share of Don Juans, Chatty Kathys and creepers as cab drivers, even one groper who was not at all impressed by my threat to call my uncle/father-in-law* in the secret police if he did not pull the cab over right now! I have ample reason to recognize an exceptional cab driver almost immediately, and my Luxor math teacher was exceptional.

He reminded me of my neighbors in the village in Peace Corps. He could have been a brother to Abu Selsabeel, father of my best tenth grade student, a gentle soft-spoken colleague, a passionate career educator of boys who was equally dedicated to girls’ education.

Though he was eager to practice his English as we drove, I was also comfortable with my driver’s Saidi dialect, and we talked easily about education and culture.

Though I was well hydrated and keeping the sun mostly off with a lightweight summer pashmina, I had set a truly brutal schedule for myself, with several more sites to see after lunch.

As he picked me up from Medinat Habu and took me to a shop where I could get more water, his protective paternal instincts kicked in. “You’re exhausted,” he said. “You can’t keep going like this. It’s not healthy. You can’t see everything in just one day. Not in this heat, after a night on the train. This is crazy. Let me arrange a felucca for you on the Nile.”

Feeling a sales pitch coming on, I started to protest.

“No, no, you misunderstand me,” he said, understanding me exactly. “I have two students, tenth graders, who have a nice sailing felucca. Let me call them up.” He quoted a ridiculously reasonable rate. “Including baksheesh,” he added, the Persian term commonly used to mean either tip or bribe across the Arab world and South Asia.

“They’re good boys,” he said, anticipating my protests as I thought them, “and they’ll treat you like my daughter. You can see the river, take pictures, relax, even take a nap on the boat without worrying about your belongings.”

And that was exactly what I did.

* ‘amm-ee, in Arabic, means both uncle and father-in-law, in addition to being a term of respect for an older man