When we divided up into different groups to learn our first words of Arabic, I was disappointed at first that I wasn’t in Jennifer’s group, who seemed to be the least shy of the LCFs. I was assigned to Rima’s group instead. Like the gazelle she was named for, she was small, slender, energetic and rarely still for long. Her neatly wrapped white hijab gave her round face a puckish intensity. As we repeated words back to her, she would bend towards us, her head on a level with ours, and reach forward with her little hands, as if weaving a spell to draw forth the correct pronunciation. Then she would dance back and cheer us on.

Lynn and Neil were in my group. In her site village later, Lynn’s neighbors would learn not to disturb her after seven at night, because once she had removed her hearing aids and contacts for bed, she was deaf and blind to the world till morning. Neil’s hearing was worse. I used my semester of phonetics training to help Rima explain the non-English sounds they struggled to hear. 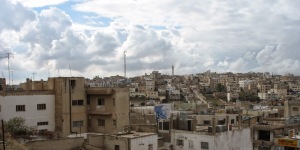 We learned SabaH el-khair—good morning, and masa’ el-khair—good evening. These were among the couple dozen words I had tried to teach myself before coming to Jordan. From Rima, I first learned to elide the final consonant of SabaH into the subdued vowel of the article el. Every time I teach someone their first lesson in Arabic, I think back on that first lesson with Rima as my model, trying to capture her exuberant intensity and the clarity of her pronunciation.

We learned gaddeish haggoh—How much does it cost? We learned the numbers, and the names of coins. Ten big coppery gersh was a shillin coin, twenty-five was a rube’ dinar coin, fifty was a noS dinar coin, and 100 gersh was a whole green paper dinar.

Beware the dinar with the late King Hussein’s likeness, they warned us. Those bills had gone out of circulation, but not all of them had been returned to the banks before the deadline, and sometimes they were slipped to an unsuspecting tourist. I kept one as a keepsake, alongside my Deutsche Mark, Austrian Schilling, Greek drachma and other extinct currencies of countries I had visited before the Euro.

That evening, armed with a bit of useful language, Naureen coaxed Katja and me into a little shopping. She needed a long cardigan to make her California clothes more Jordan-appropriate. We were also starting to recognize how cold it could get in Jordan in February.

Over the next couple years, Naureen would tell me a lot about her childhood in Pakistan, where her family came from and many of them still lived. One of the ways that helped Naureen in Jordan was that she was far more confident and comfortable than me with haggling.

We wandered in and out of two or three shops before she found what she was looking for. It was a black sweater, hanging about to her knees, in a loose, open knit. I was confused. “But you can see right through it. Are you sure? If you wear short sleeves under it, you’re not hiding anything.”

“That’s not the point,” Naureen said. “It covers everything.” It seemed little more than symbolic to me, but I deferred to her judgment. She was Muslim, had grown up mostly in a Muslim country. She must have some insight I didn’t yet have.

That sweater would become as familiar to me as my own clothes. Naureen wore it frequently when we met up in Amman or Irbid. Many times I would be at her house when the doorbell rang and she pulled her long black sweater over whatever she was lounging about in. I myself would always be more comfortable in something long and opaque, but that sweater served Naureen very well. Even if she overpaid — Madaba is a tourist town and we certainly looked and sounded like foreigners, so that’s not unlikely — it was still a bargain.