Emma and Erin gave up sweets for Lent, and Erin fasted altogether for the last two days of Lent, so by Easter Sunday morning, they were starved for sugary treats! We took advantage of that as a chance to get together. In the tradition of the Potluck Crew, we made ourselves a potluck Easter brunch, heavy on the sweet stuff: cinnabuns, Danish, fruit pizza with frosting, baked oatmeal…. It was a feast worthy of the holiday! 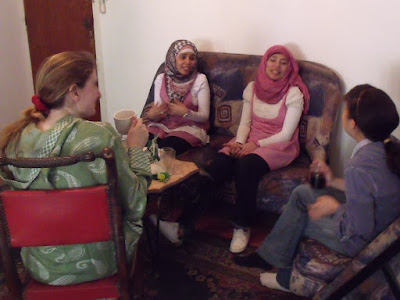 Some Egyptian friends of Emma and Erin joined us, too, and we had long conversations about the revolution, about Egyptian universities, about our families that tend towards the intellectual and eccentric, and all kinds of other fascinating things. Also, we had a ton of fun playing with their little cousin. Erin gave him the toy gun Andrew gave her for Christmas. First he played “shoot the girls” and then we played “hide the ammo” and “hide the gun” and ultimately, “hide and seek.” Hilarity ensued!

Free Cupcakes!
Yesterday, a knock on Emma’s door revealed a delivery from NOLA Bakery, the fabulous cupcake shop in Zamalek … a delivery she hadn’t ordered and wasn’t expecting. This morning, she got a call from the bakery, apologizing for delivering the cupcakes a day early. A gift called in by her parents in Vermont, the cupcakes were supposed to be in lieu of an Easter basket. So, to apologize, the cupcake shop sent her another half dozen cupcakes on Easter Sunday, free of charge! Yum!