It was long and cold and may have given me bronchitis … but it was definitely worth it! This wasn’t my first hike up to the top of Mount Sinai, where Moses spoke to God – the only man in history to do so directly! – and received the 10 Commandments … and then hiked all the way back down just to find his people worshiping some golden cow they’d made…! Let me tell you, if it had been me, I’d have done more than break a couple stone tablets! 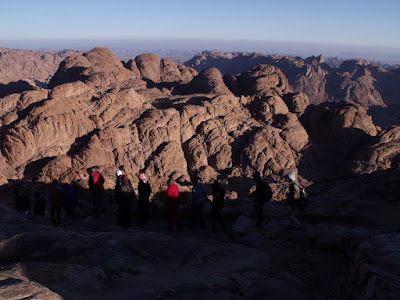 I mean, granted, they’d been walking from the Nile Delta, which is 10+ hours by tour bus, and a whole lot farther on foot! But still, Mount Sinai is no little hill, and talking to God has got to be frightening (I mean, even the angels have to preface every encounter with “Be not afraid!”), so I can only imagine Moses’ frustration to find the Chosen People distracted by a bit of bling!

It was a great hike with excellent company, though. Emma and Erin are always saucy companions. We picked up this nice Japanese guy at the hotel who is studying Hebrew in Beersheva; we didn’t manage much conversation with his limited English, but he was a quick, uncomplaining hiker. Our guide Mohammad was just home for a few days on leave from the army, and very pleased to say that he had only a month left. He’s been stationed in the coastal city of Alexandria, which was a much more violent place than Cairo during the Revolution, during which time his wrist was sprained while he was part of a human chain of soldiers holding protesters in place. He also showed me a nice little video of the girl he’ll be getting engaged to later this year. All in all, he was exactly the right amount of chatty and friendly, and not at all smarmy, and he got us an extra blanket to ward off the cold at the top, and a perfect place to watch the sunrise.

Unfortunately, St. Katherine’s Monastery was closed for Good Friday celebrations. Their little museum has the most extensive collection of pre-Iconoclasm religious icons in the world. See, the tribe in this area was charged by the Prophet Mohammad himself to protect the monks of the monastery from any and all attackers, so when the Iconoclasm happened and people came to destroy the icons brought by pilgrims from all over Christendom, the Muslim Bedouin kept them out, and not an icon was harmed. I saw the museum when I visited the Sinai with a Peace Corps colleague back in 2005, but I would have liked to see it again. 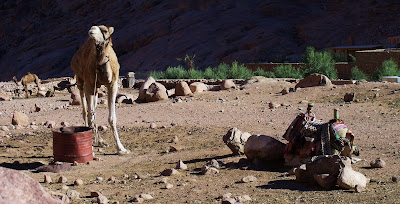