Sometimes you have to take a step backwards to go forwards.

As I walked across Tahrir Square at noon today on my way to class, I felt like the clock had been wound back a month or more. Starting about two blocks back from Tahrir Square were roadblocks of cinderblocks, metal table frames, 4X4s and other “found items,” as it were. They seemed to have been erected by the neighborhood watch committees, directing traffic away from Tahrir Square, because there were no police in sight.

Ahead of me on the edges of Tahrir Square, those roadblocks had been reinforced with concertina wire, making it hard to know whether they’d been set up by the protesters or the military.

I was a little hesitant to go forward, remembering Saturday morning’s gunfire, but I’d decided to treat myself to a Hardees Jalapeno Chicken sandwich to break a 100-pound note, and I had my patriotic ribbon on my backpack, so I kept going. Unfortunately for me, Hardees had learned a hard lesson in the 25 Jan Revolution when all their windows and been smashed and the restaurant torn apart. When they rebuilt, they installed brand new metal shutters to pull down over their shop windows, and the place was buttoned up tight at noon today.

There were only a few hundred people there, mostly clustered near Talat Harb Street and the KFC (where I later found out they were painting a mural of the military attacking protesters) and out of my way across the square. There was no military or police in sight. It seemed pretty safe, so I strode across what had become, for all intents and purposes, a giant pedestrian plaza.

As I got to the Nile side of the square, I saw a couple burnt-out police transports, which took me straight back to the violent early days of the revolution. But typically enough for the spirit of the New Egypt, the scorched hulks had been put to good use. They were filled to the ceilings with plastic garbage bags full of detritus from the weekend’s protests.

Between Tahrir Square and Kasr al-Aini Bridge, cars were parked bumper-to-bumper and people were trickling onto the square in fours and sixes and pairs.

An hour ago, when I came home from class, we skirted around Tahrir Square. I was feeling uncertain about what we might find on Tahrir Square now that schools are out and some businesses are beginning to close for the day. In the streets around the square, police were directing traffic away from the makeshift barriers extending a few blocks away from the square. I glimpsed tanks around the Interior Ministry, but I couldn’t say that they haven’t been there all along since 28 Jan.

From all directions, people were walking towards the square. It’s going to be an interesting week.

Meanwhile, let me recommend some reading from Sandmonkey, who is emerging as one of the premier bloggers in Egypt, on 7 Popular Myths About the Revolution. 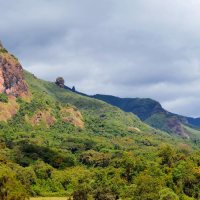