A Breather From Revolution

I want to support Egypt, and I’ve been glued to the TV day after day, but I needed a breather. I don’t have the constitution to sit on tenterhooks day and night. And where better to have that break than in my favorite place in Jordan, Wijdan’s house! Since I had extended my hospitality (and that of my Jordanian friends) to CASA Fellow Rachel, I extended the village’s hospitality as well.

I was particularly excited about taking Rachel to Mshairfeh because she’s been doing research for her Masters thesis in a small town in Egypt, and I am interested in how she sees them comparatively. We also spent a lot of time on the bus to Jerash comparing the Jordanian Bedouin and Cairene dialects, and I just love people who like to talk linguistics! 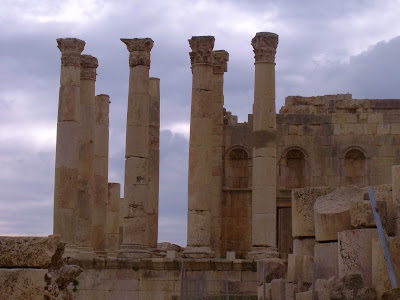 Along the way, we took some time to visit the sites of the Roman ruins at Jerash, of course. It was the first time in a long time that I’d been to Jerash and not had anyone marvel at how I talked like a native. It’s true, I really do sound like an Egyptian these days! Rachel even more so, which probably contributed to the confusion. 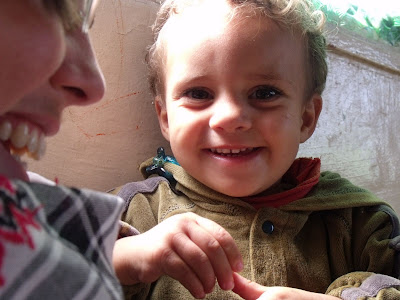 When we got on the bus to Mshairfeh, with a new bus driver who doesn’t know me, there was some confusion as to what “those foreigners” were doing on their bus. “She speaks Arabic,” I heard one say, “so ask her!” but no one did. “She used to teach in Mshairfeh,” said one older man I recognized from West Msharifeh. Then Wijdan’s nephew Sahim got on the bus, whose father owns the bus, and explained, “That’s Maryah! She’s going to my uncle’s house. And she speaks Arabic!” As my pedigree was examined, Rachel and I were listening in and laughing quietly. 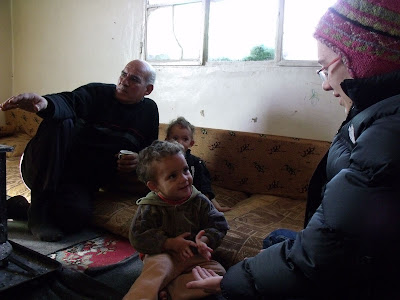 When we got to Mshairfeh and Wijdan started asking about where we’d been and what we’d done, Rachel said something I hadn’t expected. “Maryah,” she said, “is like a completely different person in Jordan. She’s so happy all the time, so happy to be here.” It’s true, but I hadn’t known it was obvious. 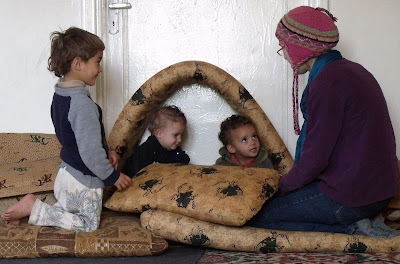 Watching Rachel play with the little kids reminded me of the early days of Peace Corps, when I really struggled to follow adult conversations at the neighbors’ houses, and playing with the little kids was such a welcome distraction. I don’t mean to suggest that Rachel’s Arabic is bad. In fact, I was impressed at how quickly she was able to make a switch to understanding and even beginning to use Jordanian Bedouin Arabic. But as I said to Tareq when he commented on how much fun Rachel was having with the kids, sometimes it’s such a relief to play with little kids that don’t speak more Arabic than you do!

Abu Tareq On Egypt
At some point, in our conversations about the protests in Egypt, I said something to Abu Tareq that I expected to be controversial. “When I lived in Jordan,” I said, “I thought I was living in a very poor country, but then I went to Egypt and realized that Jordan is not a poor country.” I expected Abu Tareq, who sometimes has to borrow from his brother to put food on the table, to think that I was belittling the suffering of poor Jordanians. Instead, without a moment’s thought, he agreed wholeheartedly, and started citing statistics of how little money most Egyptians live on. “That’s why Egyptians come to Jordan to work for just 5JD a day,” he said. “For an Egyptian, Jordan is paradise!” Even as we were hearing on TV that Jordanian hospital doctors were going on strike for 5 hours yesterday, Abu Tareq agreed that Jordan is in no danger of revolution. Jordan is a relatively good place to live, and I think even her worst domestic detractors would agree (off the record, of course!)