a day in revolutionary times

i start having difficulties with mastering the information influx and the various events that occur during one day, together with my current two flatmates we try to keep order in our thoughts and memories, but sometimes it’s hard to remember what happened in the morning, what was said by whom yesterday, or was the time order the other way around.

let me try to write a bit about today – the morning was fine, the atmosphere ahead of the day of departure (tomorrow will be day of departure II) was much better than the last two days. people were smiling again, at least on my street people were being let through road blocks. trying to organize our thoughts, posting things on the internet and getting in touch with people outside the country, we only managed to leave the flat after lunch time. on midan falky we met up with two more friends for a juice, after a few minutes army police approached us, check our papers, asked us, where we were going, we replied correctly, to my friends place, and it was ok. we went to my friends place, from the roof we could see masses streaming into tahrir. we went down and walked in. the street there was controlled by muslim bortherhood, discernible by the large numbers of beards, but more importantly by me getting an escort by a muslim brotherhood member, who showed his MB membership card to everybody at the approximately 10 civilian checkpoints along the way and said that i was german, and that it was ok. we left cameras at home, and came as students and tried to keep a low profile. inside the square the atmosphere was a lot better than the last time we had been there. but even though the festive mood had returned to some degree, people were anxious, nervous and their conversations confused. people still welcomed us in the typical egyptian way, though we started being more of a curiosity, since many foreigners left during the last two days. some people were afraid of muslim brotherhood taking over, others of a military dictatorship being established and liberties being continued to be curtailed, but everybody wanted mubarak gone. the state media had been spreading that kfc was providing free food to demonstrators in an attempt to mark demonstrators as foreign directed stooges. we had gotten some koshary (typical egyptian food, rice noodles, lentils with a tomato onion sauce on top) from one of the local places. while we were eating it, people approached us and took pictures of us, making fun of the state media for its failing efforts to frame public opinion. obviously foreigners eating koshary on midan tahrir was a good sign for them. as we were leaving a rumour spread that mubarak had left the country – people started kissing each other men had tears in their eyes, a woman with veil started shouting at us, that this was the best day of her life, that she had been oppressed by the regime since she was a child, that mubarak killed his own people and stole the money of the egyptians. she was vehement about being an egyptian first, that she has christian friends, and repeatedly screamed that the outside world should know that she is not a terrorist.

the way back home went smoothly, but all of us were confused with the different impressions, while we were on the square an announcement came out that a committee to represent the people on tahrir square was formed – it numbered 100 people and as the names were announced later on, none of the political opposition parties, whether baradei MB, kefaya or 6th of april were included. it was a non-ideological non-religious committee solely intended to represent the egyptian people [i hear shots outside again, and people are shouting in big masses] later on we got into a discussion whether the MB or the army was the bigger threat, someone who was well informed came by, and we discussed the events of the day and what will happen on the next day. [i’m shutting the lights, the shots are getting closer, and my cat horreya wants to cuddle] the opposition will continue, but outside activity will be come paramount, there needs to be more pressure from the outside, the man needs to leave, and foreign governments need to get actively involved in whatever capacity they see fit in the transition process. foreign meddling won’t lead to anything good, but offers of assistance in general terms will probably be heard. the people here are very capable, but mubarak is still fighting desperately and, if, like two of my egyptian friends have told me know, he shall not turn cairo into the rome that nero burned, more needs to happen from the outside, in culturally and politically appropriate manner, and the egyptian people shall overcome. [street hunts are continuing on the streets.] some prayers wherever would be nice

Amir Heinitz is my roommate, still living in our apartment just a few blocks from Tahrir Square in Cairo where the protests and street fights have been raging for 12 days. 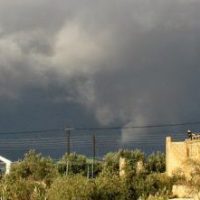