The Temple of Horus at Edfu
This is a Ptolemaic temple, i.e. primarily constructed by the Greeks who established themselves as pharaohs in Egypt after Alexander the Great was confirmed by the Oracle at Siwa as the son of the god Amon. It’s interesting to notice that throughout the centuries, invaders of Egypt have not usurped local traditions and religion, they’ve merely adopted them and installed themselves as descendants of the same pharaohs. In fact, the Mamasium (Birthing Room) in the Edfu temple tells not the story of a specific Ptolemaic pharaoh being conceived by the gods, but of all of them collectively.

It’s also the most intact pharaonic temple I’ve seen yet, with most of its ceiling intact, and much of the inner sanctum. In fact, oddly enough, the reliefs in the bottom half of the temple are almost perfectly preserved, while the upper half of the walls is quite weathered. This is because the temple was filled half way with sand until this century, protected from the elements. But like the temples in Petra, it was lived in during the intervening centuries, and the ceilings are blackened with smoke from their homefires. Later Muslim residents also scratched out the faces and features of the gods they could reach from ground level, so they would not be a distraction to their children from their true religion.

This temple, like the old pharaonic temples, is dedicated to a triad of gods. In the innermost sanctum is not one chapel, but three chapels side-by-side, a design very much similar to the current design of Coptic churches. One probably developed from the other. Certainly, as we’ve seen on this trip, many pharaonic temples were developed into churches in various ways. Just as the Roman Catholic Church adopted the East-West orientation of Roman temples into Catholic architecture, so the Copts seem to have adopted triple altars.

The Double Temple at Kom Ombo
We arrived in Kom Ombo just at sunset tonight, and found the temple lit in a soft yellow glow, not to mention teeming with tourists! This Ptolomaic temple is unusual in that it is a perfectly symmetrical double temple, dedicated to the crocodile god Sobek and the falcon-headed god Horus. In fact, small crocodiles were probably kept in a well to one side of the temple, and mummified crocs were found in vaults under the temple during its reconstruction.

There a couple of other unique features to this temple. It has the only known intact Calendar Room, indicating which rituals should be performed, and what sacrifices made on each day of the entire 365 day year. There’s also a unique relief of medical implements used during the Ptolemaic era. You can also find evidence of cross-beams and animal hitches hacked out of the rock by the farmers who lived in the temple in later years. 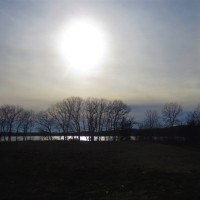