If Eshrak is willing to try, I can certainly give it another go!

Bethany Beyond Jordan, by the Dead Sea

Though I had totally wimped out on the last bike trip, Megan and Stephanie and Aktham and the guys convinced me that it was worth another try, so there I was a week later, at 8am on a Friday, getting on a bus for the Dead Sea with the Tareef Cycling Club. I reminded myself that it had been my intention in graduate school to become competent on a bicycle (until I realized that southern Indiana isn’t flat!), and that the last trip proved that I am sorely out of shape. This time, at least, the route would be warm and almost completely flat.

Not only that, but I was really looking forward to seeing the people. I had learned that Jad is a friend of my friend Emily, who used to sometimes go on trips with the cycling club. Megan and I had also met a very nice kindergarten principal named Muna while getting our nails done by our favorite Filipina Angie, and Muna said that she’d been a frequent participant in Tareef events, except that they are generally too early in the morning on her only day off. She had said, however, that she’d be coming to the Dead Sea. 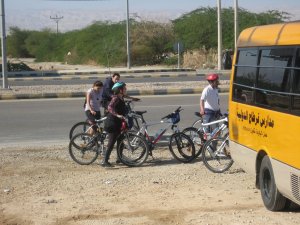 There are, unsurprisingly given the activity, a number of Germans in this group, too, and the prospect of maybe practicing my German is generally too good to pass up. There was also an Internet journalist who studies at UWashington, and wrote this article with a short video about the trip. Plus, as meeting Aktham proved last trip, it can be a great networking opportunity, and that’s something I should be learning how to do if I’m going to be having so-called “real jobs.”

As it worked out, this was a perfect trip for a wimp like me. The first long, slight incline got tough after awhile, but then it was a little up but mostly down a few little bumps hardly worth calling hills, and the scenery was wonderful and the weather perfect. And it felt so good to know that I didn’t have to walk my bike even once, and was right in the middle of the group, neither fastest nor slowest. And afterwards we had a great lunch, met some more fun people, and Aboud even showed up in his cool paraplegic car for a cup of tea!